The M2 tidal energetics are studied for two realistically forced global ocean HYCOM simulations with horizontal resolutions of 8 km (H12) and 4 km (H25) and 41 layers. In both simulations the M2 SSH RMS error with TPXO is 2.7 cm. To optimize the tidal accuracy, the wave drag is tuned differently: in H12 the wave drag scale is 0.5, while in H25 it is 0.3. In HYCOM, the wave drag dampens both the barotropic and baroclinic tidal waves. The M2 baroclinic fields are decomposed into the first 5 vertical modes. In H12 the first 2 modes are resolved, while in H25 the first 5 modes are resolved. From H12 to H25, the M2 barotropic energy conversion to the resolved baroclinic wave modes increases by 47%, mainly due to the increased resolution in H25. At the same time, the barotropic energy lost to the wave drag decreases in H25 due to the reduction in drag scale. In both simulations, the sum of the resolved conversion and wave-drag dissipation, which represents the unresolved high-mode conversion, is the same (about 1 TW), in accordance with both simulations having identical tidal accuracy. The M2 barotropic energy conversion to the first 5 modes agrees with analytical models based on Bell's theory. The reduction in wave drag scale also reduces the damping on the resolved baroclinic modes in H25, which are too energetic when compared to satellite altimetry and altimetry-inferred fluxes. The resolved, low-mode, internal tide dissipation rates in H25 are in agreement in magnitude and spatial distribution with dissipation rates inferred from Argo and Mirco- and Finestructure data. However, when the parameterized high-mode dissipation is included, the tidal internal tide dissipation is larger than the rates inferred from Argo and Fine/Microstructure. These findings suggest that HYCOM needs barotropic and baroclinic wave damping terms that can be tuned separately. 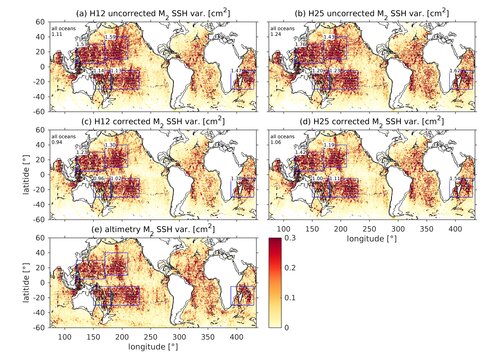