The nature of near-uniform fluctuations of sea level and ocean bottom pressure found across the deep ocean basins of the Arctic Ocean and the Nordic Seas is revisited. Here, we focus on the fluctuations' spatial variation. Previous investigations have identified the principal cause of the fluctuation being winds along the continental slopes forcing divergent coastally trapped waves. Using an ocean general circulation model and its adjoint, the spatial variation of this mechanism is further examined, including differences across the Arctic Mediterranean and discrepancies between contributions from within and outside the domain (e.g., Figure below). Mechanisms underlying the fluctuation's difference between the deep ocean basins and the shallow coastal regions will also be discussed and the fluctuation's far-field response examined. The fast barotropic process accounts for most of the sub-monthly to interannual variations of sea level and ocean bottom pressure in the deep Arctic basins.

Figure Caption: Sensitivity of mean ocean bottom pressure across the deep ocean basins of the Arctic Mediterranean to winds along- (A) and across-bathymetry (B). Note the dominance of (A) over (B), differences in sign between those within and outside the Arctic region in (A), and variations along the continental slopes especially regions with weak sensitivity. 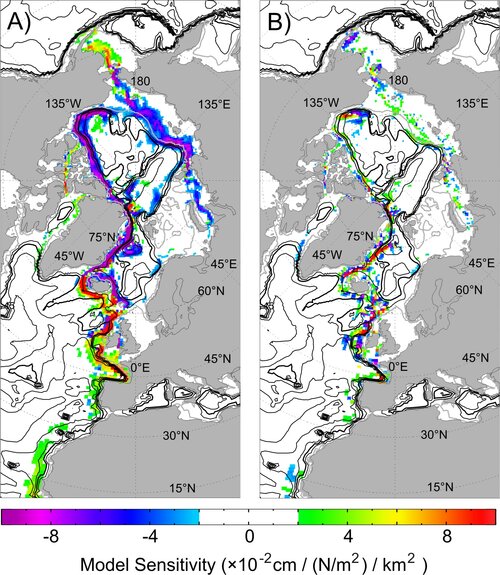