Satellite sea level anomaly observations show that low-frequency motions in the subtropics are characterized by long-lived jet-like features (striations) that slowly, at a speed of about 0.3-0.5 km/day, propagate toward the equator. In their presence, the space-time distribution of mesoscale eddies is not random but rather anchored to the striations. Specifically, the distribution of eddies alternates between “troughs” of enhanced concentration of cyclonic eddies and “ridges” of enhanced concentration of anticyclonic eddies, termed “storm tracks”, which follow the striations in their meridional propagation. The factors controlling such a behavior are investigated using output of the Ocean general circulation model For the Earth Simulator (OFES), which is shown to reproduce these features remarkably well. The diagnostics suggest that the striations’ life-cycle can be characterized by two dynamically distinct components. The first one is attributable to baroclinic instability of a large-scale, weakly sheared meridional flow in the subtropical gyre, which serves as the main energy source for the zonal striations. The second component arises from the nonlinear interactions between the zonal striations and eddies. Transient striations locally alter the mean potential vorticity distribution associated with the large-scale background flow in which they reside. This alteration is in turn responsible for the formation of eddies preferentially along the striations, consistently with the meridionally localized regions of enhanced or reduced baroclinicity and stabilizing or destabilizing effect of the planetary vorticity gradient and horizontal shear. When the striations move, the dynamics that generate eddies move with them, producing migrating “storm tracks”. Aligned eddies feed back onto the zonal flow, reinforcing the pattern of the striations.

Figure: (a) Root-mean-square surface geostrophic velocity variability (cm/s) based on satellite altimetry data from November 1992 to October 2012. Shown on top are contours of the mean dynamic topography (Maximenko et al., 2009). (b) Time-latitude diagram of the zonally averaged zonal geostrophic velocity anomaly (cm/s). Boundaries of the zonal bands, over which the zonal averaging is applied, are shown in (a) by the white dashed lines. The white rectangle in (a) delineates the study area. 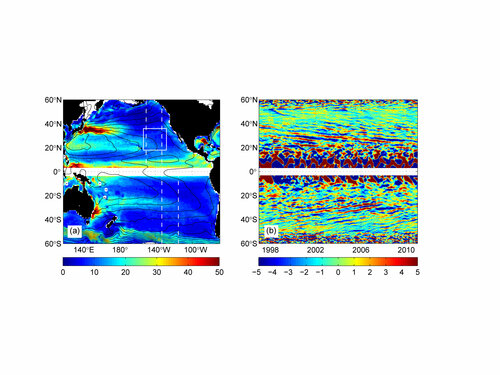