Over the past two decades, the sea level in the western Pacific rose up to three times faster than the global mean, while its counterpart in the eastern Pacific including U.S. west coast was nearly stationary or decreasing. It is puzzling how long this pattern of regional sea level changes has been gone and what is the dynamic cause. Combining recently reconstructed long-tern sea level data products, upper-ocean measurements, and a non-Boussinesq ocean circulation model, we show that, for the first time, the regional sea-level trends have undergone two shifts, during the mid-1970s and in the early 1990s, in a manner of accelerating on one side of the Pacific, but decelerating on the other side. The multidecadal regional sea-level shifts are the consequence of upper-ocean heat changes due to the Pacific Decadal Oscillation (PDO)-induced ocean circulations. It is further suggested that the stationary sea level along the U.S. West coast can flip into an upward trend as what had happened in the period of 1980s if the climate-induced wind pattern shifts in the Pacific. 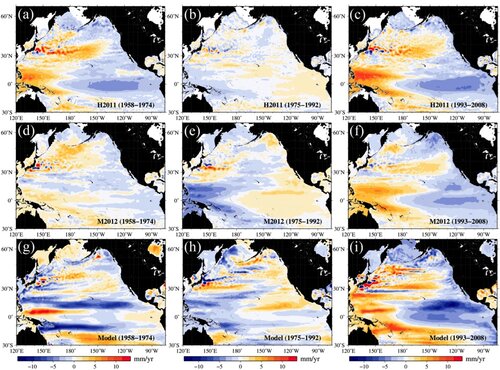