Large southern ocean icebergs (>10nm) are routinely tracked and monitor either using visible and SAR images the National Ice Center or using scatterometer data by the Bringham Young University. NIC also provides the size of the icebergs. However, to estimate the volume of ice it is necessary to have the thickness of the iceberg or their freeboard elevation. The volume of ice is a key parameter to estimate the ice cap mass balance or the fresh water flux in the ocean.
Up to now very few freeboard measurements, either in situ or from remote sensing exist. Since the launch of Seasat, the potential of altimeter to measure the profile of freeboard elevation over large icebergs have been demonstrated but very few examples were available because the tracker could rarely cope with the rapid change of elevation between sea and icebergs. The technological improvment of sensor and algorithms (especially on tracker loop) since the launch of Jason-1 allow to reduce the loss of data during elevation transitions and open a new way to measure the iceberg freeboard on a quasi routine basis.
The SGDR archives from Jason-1, Jason-2 and Envisat have been systematically collocated with the BYU and NIC icebergs track and the collocated altimeter data have been analyzed. More than 5300 altimeter passes for the 2002-2012 period have processed using a simplified ICE2 retracker to produce an iceberg data base of freeboard profile, backscatter profile and size .
The altimeter freeboard elevation profiles have been validated using GLAS Icesat profiles for the A38b icebergs while the length estimates using NIC length and width from images analysis.
This database have been used to study the distribution of freeboard and size as a function of the quadrant of origin of the iceberg. It is also possible to study the melting of individual icebergs and to estimate a general melt rate using coincident Sea surface Temperature from AMSR. The variation of backscatter along the iceberg lifetime in particular when the iceberg travels in open water, i.e. during its melt can also be analyzed.
Finally the NIC, BYU and altimeter database have been merged to produce for each iceberg a daily estimate of size and freeboard and thus a daily estimate of the volume of ice present in the southern ocean and in open water (see figure).
Figure caption
(a) Total volume of ice from the NIC data base (blue line), the altimeter database (green line) and from the merged NIC and altimeter database (red line); (b) number of icebergs (blue line), number of icebergs wwith no size or elevation data (green line) and number of iceberg of size larger than 400 km2 (red line). (c) Volume of ice in open ocean (same legend as (a)). 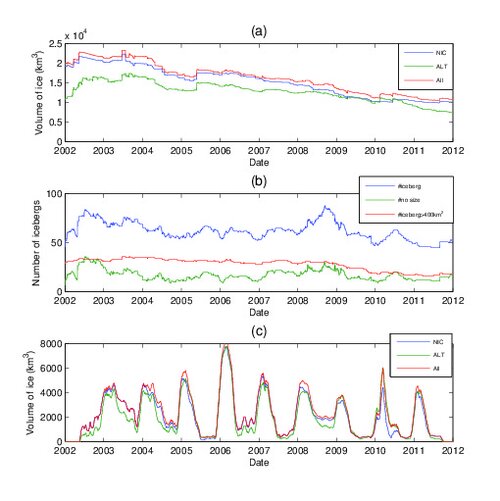