Altika and Cryosat for iceberg studies

Altika and Cryosat represent two aspect of the new technological development in altimetry. The Ka band technology allows a better vertical and along track resolution while the Delay Doppler/SAR altimetry along track processing increases resolution and offers a multilook processing with the two independent dimensions: along-track and across-track (range). These new capabilities offer new possibilities for the study of icebergs either large or small.
The potential of Altika to detect target emerging from the sea surface (icebergs, ships, ...) has been studied using the method developed for previous altimeters. The principle is that any target above the sea surface gives a detectable signature in the noise part of the altimeter waveform. Because of its higher resolution both vertical and along track Altika allows a much better detection of small icebergs than past altimeters. This is particularly noticeable around Greenland. For large icebergs, the collocation of altika passes and database of large icebergs tracks around Antarctica allows to analyze the signature of large icebergs in the waveforms. Altika provides very valuable estimates of the icebergs freeboard elevation and surface backscatter but compare to Jason2 or Envisat its tracker tend to loose lock more easily over the fast elevation changes between sea and icebergs. ALtika will certainly be a valuable tool to continue and improve the analysis of icebergs.
Cryosat offer a complementary approach to the detection and analysis of small icebergs. In theory a small iceberg should have a detectable signature in the noise part of the waveforms, as in the case of conventional altimetry and this signature should be associated to a doppler signature that should change signe as the altimeter passes over the iceberg. It can be shown by simple geometry that it is possible to estimate the iceberg freeboard from the shape of the iceberg signature in both range and doppler. However, the along track processing certainly because it was not properly windowed tends to "smear' the peak of energy of the iceberg and partly hamper the possibility of the estimation of the iceberg. We present cases studies of the signature of small iceberg in Cryosat SAR data.
Figure Caption
A (top) Atlika waveforms over the C16 iceberg, (middle) tracker (blue line), ice range (red line) ocean range (black line), (bottom) backscatter. B Cryosat data over two small icebergs. (Top) 80 Hz waveforms. Only the noise part of the waveforms are presented. (bottom) Multilook waveforms for the same location. 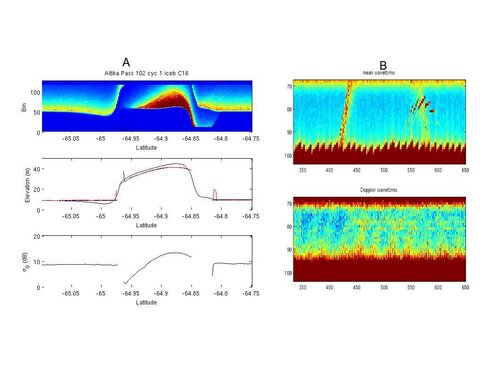