The intra-annual variability of the tropical Atlantic Ocean north of the Equator is investigated with satellite altimetry sea level anomalies, sea surface salinities and signal analysis methods such as the Empirical Mode Decomposition. Two regions of high variability are identified. The first region, between 3°N-11°N, is characterized by the presence of westward propagating eddies linked to the North Equatorial CounterCurrent (NECC) retroflection in the vicinity of the Brazilian coast. They show a strong annual cycle as expected. Our methods point out that this signal is frequency modulated shifting from large length scale structures in October to smaller ones in March. Consequently the number of "eddies" per year can be aliased, according to the time and location of sampling, and can impact the percentage they explain of the inter-hemispheric exchange of mass and heat associated with the meridional overturning circulation’s upper limb. The second region reveals the presence of westward propagating instability waves centered north of the Equator (3°N-7°N) between 50°W-10°W. These instability waves also show a strong seasonal cycle with maximum amplitude around August.  They are clearly distinct from the NECC instabilities. 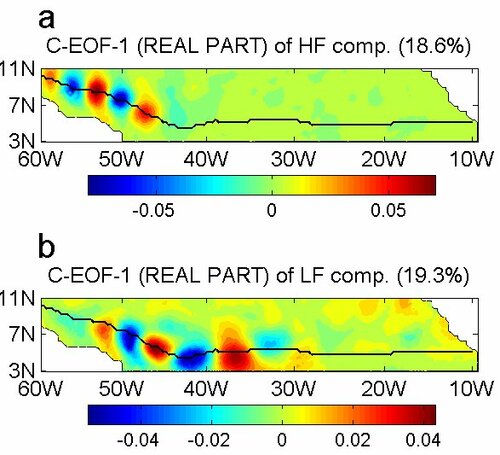