The rain flag algorithm for Jason-2 and Jason-3 is based on work done for Topex and Jason-1 (Tournadre & Morland, 1997). Data is flagged as being affected by rain via combination of backscatter (sigma-0) attenuation plus high levels of cloud liquid water (CLW). Backscatter attenuation is stronger in Ku-band than C-band, so a mean relationship of Ku vs. C-band sigma-0 is used to define a threshold of attenuation (Ku-band sigma-0 < expected value based on C-band sigma-0) to flag rain-impacted data.

After the launch of Jason-3, on 2016-01-17, early cal/val analyses indicated excessive rain-flagging in the Jason-3 OGDRs and IGDRs. This was due to satellite off-pointing early in the mission (prior to 2016-03-15) which resulted in the Ku-band sigma-0 values being biased low by about 0.36 dB. Thus the Ku/C-band relationship appeared to show large attenuation, and a disproportionate number of values were flagged. In response to this, a patch was made in the data processing systems to adjust the Ku and C-band sigma-0 values prior to computing the rain flag, making the distributions consistent with the historical relationship. Version "T" OGDR and IGDR data do NOT benefit from this update, while version "d" Jason-3 data account for these sigma-0 offsets.

This presentation discusses the current state of the rain flag algorithm for Jason-2 and Jason3, as well as ways to potentially improve it:

1) paying special attention to coastal regions, where the current rain flag is always set by the radiometer land flag

2) accounting for the evolution of the Ku vs. C-band sigma-0 relationship (attenuation), observed during the Jason-2 mission

3) the addition of SWH dependency in the rain flag algorithm, resulting in a few % less 'false positives' in the data (Figure 1).

Figure 1. Example of reduction in rain flagging by inclusion of SWH for Jason-2. 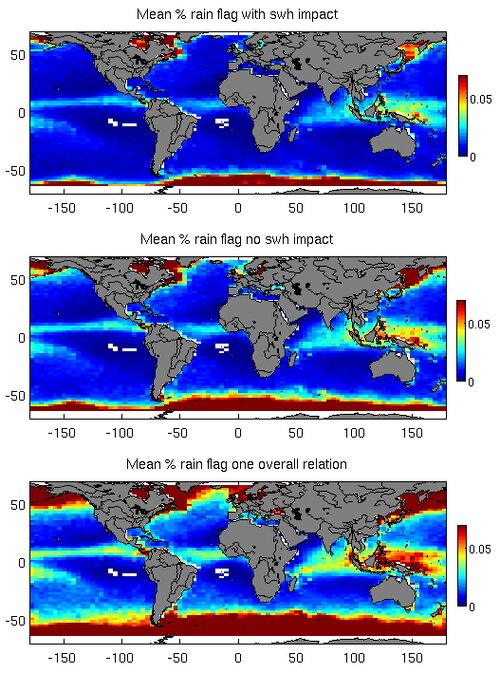