CASSIS-Malvinas: Dynamics of currents on the continental shelf and shelfbreak in the southwestern Atlantic, Argentina

This study shows preliminary results of the data obtained along the northern transect of the CASSIS-Malvinas (Southwest Atlantic Currents Satellite In-Situ) project (see Saraceno et al presentation). Between December 2014 and November 2015, five moorings recorded direction and speed of currents, temperature, salinity and pressure. The five moorings were deployed under the Jason track #26: two in the continental shelf (A1 and A2) and three in the shelf-break (A4, M1 and M2). A1, A2 and A4 are located at the sea-bottom. M1 and M2 are tall-moorings. A1 and A2 currents time series are the longest record obtained in Patagonian shelf.
Depth-integrated time-averaged currents over the shelf-break are aligned with the isobaths in the two moorings located in the upper portion of the slope (moorings A4 and M1, Figure 1). The mean currents at A2, A4, M1 and M2 show a NE orientation while A1 has an NEE orientation and mean speed values are of 13.2, 27.2, 28.1, 21.4 y 15.8 cm/s respectively. Over the shelf results are in good agreement with the mean values that revealed local regional models at the surface but show important differences at the bottom (eg Palma and Matano, 2008). At the shelf-break results are in agreement with previous observations (eg Spadone and Provost, 2009).
The vertical structure of the currents shows that the flow has, most of the time, a barotropic structure in all the five moorings. Therefore, the large correlation coefficients found between satellite altimetry data and in-situ data (cf poster by Ferrari et al) suggest that the latter are a good proxy of the mean currents in the region.
Gridded altimetry and SST satellite data show that the largest inversions observed in the current meter measurements over the shelf-break (A4, M1 and M2) are related to eddies and mesoscale structures that intercept the Malvinas current at that latitude. The largest blocking events occur at the beginning of the time record (December 2014) and from May to end of September 2015. 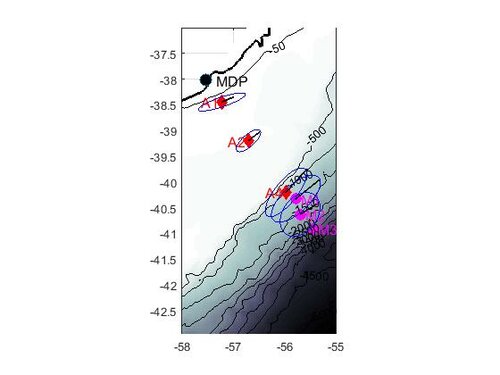