Ocean surface circulation is important for many natural processes and for human activity, yet, surface currents are not measured accurately by the present observing system and not described well by the models. Complex hydrodynamics of interaction with high-frequency ocean motions and wind, flowing over a rough sea surface, make simulations of drift of floating objects even more difficult. As a consequence, model particle trajectories based on surface currents from ocean circulation models often deviate greatly from paths of real debris items.

While perfect solution is hardly feasible, relatively simple practical methods can help to improve quality of the models. Many types of motions (such as Stokes drift, including breaking wind waves, down-wind slip, subsurface velocity shear, etc.) are mostly associated with effects of local wind and, therefore, can be parameterized using data of marine debris. Unfortunately, trajectories of debris are commonly unknown and data are sparse and opportunistic.

In this study, we develop methods to calibrate a suite of oceanographic models using random at-sea and on-shore reports from the 2011 tsunami in Japan. Improved models reproduce main peaks in debris arrivals in North America and Hawaii and allow to estimate initial numbers for particular types of debris. For example, we found that tsunami likely washed into the ocean approximately 1000 boats and nearly a half of them are still floating.

A new technique is also developed to estimate probable trajectories of individual debris items. It helps to understand composition and survivability of alien species colonizing marine debris and to estimate associated risks for the ecosystem.

Improved models are used to simulate drift of debris from general sources and from accidents and help to understand global balances and distributions. Future improvements require altimetry and scatterometry satellite missions with better space-time resolution as well as new technologies for more direct sensing of surface velocities and for measuring locations of larger floating debris and concentrations of smaller items.

Figure. Simulation of marine debris drift from the 2011 tsunami in Japan with the IPRC Drift Model, colors indicating different windages. Inserts: (left) boat sucked out to sea in the tsunami and found north of Hawaii; (right) timelines of “tsunami” boat arrivals on the US/Canada West coast from reports (gray bars and magenta line) and (other colors) drift models. 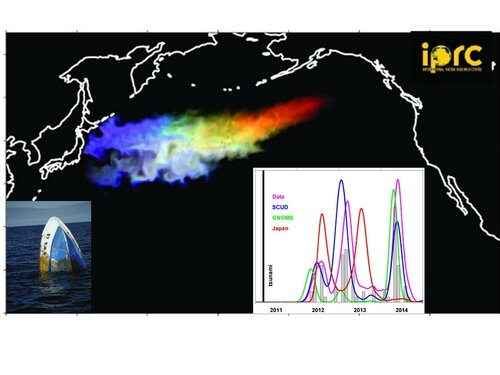