Water level from sea ice-covered oceans is particularly challenging to retrieve with satellite radar altimeters due to the different shapes assumed by the returned signal compared with the standard open ocean waveforms. Valid measurements are scarce in large areas of the Arctic and Antarctic Oceans, because sea level can only be estimated in the openings in the sea ice (leads and polynyas). Similar signal-related problems affect also measurements in coastal and inland waters.

This study presents a fitting (also called retracking) strategy (ALES+) based on a subwaveform retracker that is able to adapt the fitting of the signal depending on the sea state and on the slope of its trailing edge. The algorithm modifies the existing Adaptive Leading Edge Subwaveform retracker originally designed for coastal waters, and is applied to Envisat and ERS-2 missions.

The validation in a test area of the Arctic Ocean demonstrates that, compared to an existing open ocean altimetry dataset, the presented strategy increases the number of sea level retrievals and decreases the covariance error by 0.4 cm in the sea ice-covered area; moreover, it decreases the retracking open ocean noise by over 1.1 cm with respect to the standard ocean retracker. Further tests against in-situ data show that also the quality of coastal retrievals increases compared to the standard ocean product in the last 6 km within the coast and that along the Mekong River the new retracker scores as well as the Improved Threshold Retracker.

This suggests that a single retracking algorithm can be used to improve the sea level records at high latitudes, but also for any other reflecting water surface. Moreover for the first time:
1) a homogeneous retracking strategy is not only verified, but also validated against in-situ sensors
2) the benefit of a subwaveform strategy in the open ocean compared to a full waveform algorithm is demonstrated in terms of a higher precision of the measurement

The algorithm has been used to reprocess Envisat and ERS-2 data for the new DTU/TUM Arctic and Antarctic sea level product available via the European Space Agency's Sea Level Climate Change Initiative (http://www.esa-sealevel-cci.org). 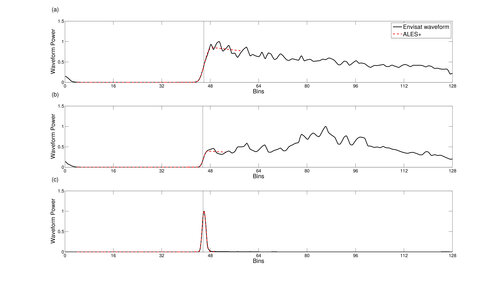