Session: Science I: Climate data records for understanding the causes of global and regional sea level variability and change

The Mediterranean Sea can be viewed as a “barometer” of the North Atlantic Ocean, because its basin-averaged sea level responds to oceanic gyre-scale changes in atmospheric pressure and wind forcing, intrinsic to the North Atlantic Oscillation (NAO). The climate of the North Atlantic and the entire Northern Hemisphere is largely controlled by the Atlantic Meridional Overturning Circulation (AMOC) that transports heat from the South Atlantic towards the Arctic Ocean. In this study, we report for the first time (to the best of our knowledge) on the teleconnection between the AMOC and the Mediterranean Sea level observed in 2004-2015: a reduction/increase in the AMOC transport is associated with a higher/lower than average sea level in the Mediterranean. By using available observations and an ocean model output we perform a comprehensive analysis of dynamical mechanisms responsible for this teleconnection. On one hand, we show that on monthly to interannual time scales the AMOC and the Mediterranean Sea level are both driven by similar NAO-like atmospheric circulation patterns: a stronger/weaker anticyclonic gyre present during a positive/negative NAO state (i) drives northward/southward anomalies of Ekman transport around 26°N that directly affect the AMOC and (ii) are associated with westward/eastward winds over the Strait of Gibraltar that force water to flow out/in the Mediterranean Sea and thus change its sea level. On the other hand, we reveal a connection between the surface and lateral heat and freshwater fluxes near the North Atlantic eastern boundary that drive the interannual variability of the local steric sea level that can propagate in the form of coastally trapped waves towards Gibraltar and also contribute to changes of the Mediterranean Sea level. The lateral advection is directly related to the AMOC, mainly through the upper mid-ocean transport. The two mechanisms (direct wind forcing and indirect effect of remote buoyancy forcing) are found to be contemporaneous and related to NAO and, therefore, they can amplify the effect of each other on the Mediterranean Sea level change. 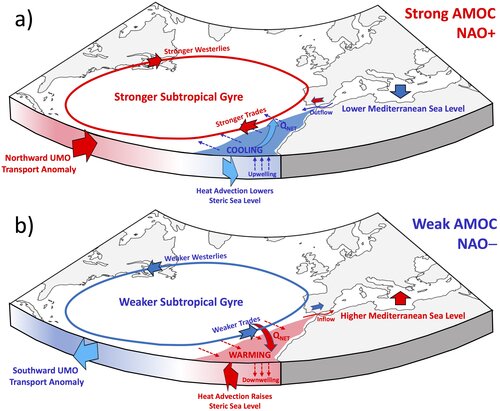