Radio Frequency Interference (RFI) characterization and mitigation at the Goddard Geophysical and Astronomical Observatory (GGAO) in Greenbelt Maryland USA is necessary to successfully co-locate the four geodetic techniques associated with the Space Geodesy Project. An issue of compatibility arises between the DORIS beacon and the VLBI Global Observing System (VGOS) radio telescope because both techniques possess mutual frequency coverage at 2036 MHz. At GGAO, the operational DORIS beacon is over 200 meters away from the VGOS system and behind buildings without a clear field of view. Because of its operational status, it is not possible to carry-out controlled experiments with this beacon. To circumvent this logistical problem, a DORIS test beacon and antenna was loaned to NASA for 2 months to test blocking schemes at a variety of distances to the VGOS radio telescope without disrupting DORIS operations. For the 2014 DORIS Workshop, an emphasis will be put on the testing conducted with a DORIS simulator at GGAO.

An initial baseline test was run with an unblocked test beacon that was placed only 136 meters away. This beacon was only turned on with the VGOS radio telescope frontend protected by a cover plate. The power measured by a standard gain horn (SGH) placed near the intersection of rotational axes (IOA) measured power equal to -29.4 dBm at the test frequency of 2036245.78 KHz. We are investigating the implications of such a power level (-29.4 dBm) on the performance of the VGOS receiver.

Mesh materials have been identified which are expected to be robust in all-weather conditions and effective in mitigating the reception of the DORIS signal by the VGOS technique (by ~15 dB). We will report on experiments conducted whereby both the DORIS Test beacon and the VGOS receiver are operated in a continuous mode to look at the effectiveness of the blocker. Because the blocking scheme is expected to introduce multi-path reflections, we will also report on these perturbations as detected by satellite-borne IDS receivers.

Diagram of the configuration at GGAO 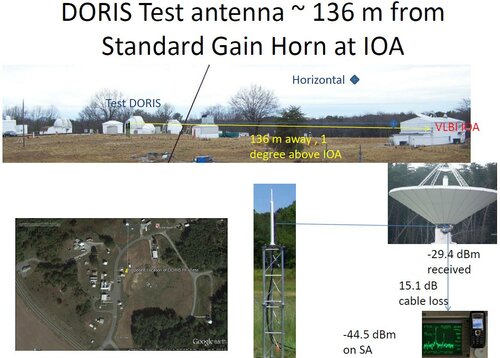